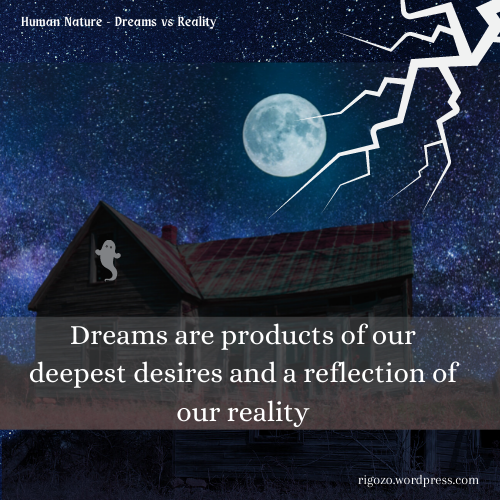 You can decide after you are done reading this post. I already have the answer.

I believe that this dream happened because I started watching Shingeki no Kyojin – Attack on Titan (AOT) a few days ago. It’s a dark fantasy anime about how humans where driven to the brink on extinction by gigiantic man-eating humanoids called titans (Eotenas), and settled behind three huge walls to protect themselves. I found out that the Director, Tetsurō Araki also did Death Note – now that’s another mind-blowing anime. I know some people would say the hype about AOT is not worth it, but guys I’m in Season 3 and so far, I’m intrigued. I think it’s a masterpiece.

And no, this is not just about my love for AOT. It’s about dreams and reality, and how the two overlap.

Back to my dream.

About ten soldiers were together in a log cabin at night. There was a fireplace and candles were scattered around the sparsely furnished room. The scene was rustic and shadows cavorted in the gloom.

The atmosphere in the room was tense. They all stood in a loose circle, but I still couldn’t make out what they were arguing about as I watched them. One man stood out from the rest – I assumed he was their commander – and clearly, he was the one in charge. Or so I thought.

Nothing prepared me for what happened next.

Suddenly, as if they had been waiting for the signal, all except one of the men in the room attacked the commander. I saw limbs and blood spraying on all sides. Sure, the commander was a tough cookie, and he fought them off, but he was just one man, and he was unarmed.

As the commander fought for his life, I heard him shout at them in an agonized voice, “I knew something was off. I saw the evidence of it on the battlefield.”

I noticed that the lone fellow that didn’t attack him pulled back into the corner as shocked as I was by his comrades’ actions. At first, it looked as if he was going to help the commander but the odds were against him – mind you nobody paid me any attention. Anyway, he didn’t stand a chance.

Soon the commander was screaming his head off because his men tore into him with their teeth.

They were eating the commander alive.

Yo! I did not see that coming.

The commander’s screams were raw and anguished, as if pulled from the depths of his soul, even as chunks of his flesh were bitten off savagely and consumed by his men. Their eyes were fevered and their faces were covered in blood as they clawed him like wild beasts. The man in the corner was frozen, his eyes glued to the scene before him, wide with terror.

The fire was crackling in the hearth, the commander was choking on his blood, his men were feasting on him and my heart was hammering in my chest.

Hei! The shock of what I just witnessed was unlike anything. If I could, I would have emptied the contents of my stomach on the floor. I was terrified to the bone, and even though a part of me knew I was dreaming.

Sometimes a dream can feel so real, reality pales in comparison.

Thankfully, I woke up.

I was reeling from the dream and was unable to shake it off even after several minutes had passed – usually my dreams fade away from memory as soon as I open my eyes but this one was a keeper.

And so, I mulled over the dream in the dark, unable to go back to sleep. Can you blame me? My brain was keen on it and started up threads of thoughts – like a mind map.

No spoiler: If you’ve watched Attack on Titan, you’d know that the Titans or Eotenas preyed on humans and pushed them to the brink of extinction. Eren Jaeger is the protagonist and had enough reasons to hate the Titans. Along with his childhood friends Armin Arlert and Mikasa Ackermann, they joined the Military, Survey Regiment and fought side by side to wipe out the Titans.

Of course, I was aware that the nature of my dream which drifted towards human depravity – in this case, cannibalism. In fact my brain needed no extra push to bring up The Tenescowri from the book Memories of Ice (A Tale of Malazan Book of the Fallen). This is a series that I am curently reading.

No spoiler: The Tenescowri were the peasant army of the Pannion Domin (a continent in the book). Their ranks were made up of survivors of the Domin’s crusade against its neighbors. The Pannion Seer (their god-king) purposely starved them and used them to support his army as an expendable force. They were all bat shit crazy and fed on the dead – even devoured their comrades that fell in battle – and the women raped dying enemies to give birth to The Children of The Dead Seed. They overwhelmed the enemies with the sheer force of their numbers and hunger. Their leader was a guy called Anaster.

No spoiler: Another instance of cannibalism was a tribe mentioned by Major Hange Zoë in AOT – She’s a member of the Scout Regiment (one of the three armed forces that make up the military) and commander of the fourth squad. While conducting a research on two captured Titans – she took the liberty to name them Bean and Sawney – she told them a story about a vicious tribe of humans that developed a taste for human flesh (just like titans chomped on humans). They hid in caves tucked in the mountains and terrorized travelers that used the roads – they robbed them, killed them, and ate their flesh. They continued unopposed for 25 years and about 500 people fell prey to them before they were wiped out.

By now you may have concluded that my head holds a lot of rubbish scenes of bloodbaths and so it’s no wonder that my dream was fifty shades of messed up. I agree with you. Every genius must have felt overwhelmed like I was, it’s the price to pay for awesomeness. Which was why, while normal people slept, my mind was having a fine time churning out human depravities, both real and imagined, as I lay in the dark.

Is man by nature good or evil?

Somehow I started considering the statement, ‘The strong prey on the weak.’ By weak I mean those that are unable to defend themselves from getting crushed by powerful entities; those that are easily influenced; the poor and the sick. And last week I had a conversation with a friend and he mentioned that Weak is relative. He was trying to say that even in the gathering of the strong, they will not all have the same level of strength. This was all just floating around in my head and of course AOT conveniently fit into it. I’m reminded of Armin Arlert.

No spoiler: Armin Arlert is also a soldier of the Scout Regiment and childhood friend of Eren Jaeger and Mikasa Ackermann. Armin, although percieved to be the weakest, is highly intelligent, most definitely a fine deuteragonist, and such a dreamer.

“We’re going to explore the outside world someday, right? Far beyond these walls, there’s flaming water, land made of ice, and fields of sand spread wide. It’s the world my parents wanted to go to” – Armin Arlert

“The strong feed upon the weak. It’s such an obligingly simple rule. Except in this world, my friends tried to be strong.” – Armin Arlert

“I don’t like the terms “good person” or “bad person” because it is impossible to be entirely good to everyone. To some, you are a good person, while to others, you are a bad person.”
― Armin Arlert

My brain was full steam ahead. Somehow it conveniently forgot that we should be resting. So rude! And moments later I remembered a bible passage that I came across in a book titled Love – The Way to victory by Kenneth E. Hagin (I had to open my bible and do a search of the general area because I couldn’t recall it exactly).

Hebrews 8: 11 – And they shall not teach everyone his fellow or every one his brother, saying, ‘Know the Lord,’ for all shall know me, from the least of them to the greatest. – Revised Standard Version

Okay! I think I had something there but mehn I was tired and I wanted to shut down everything and call it a night. The way it was, I had a dream, and thereafter I was unable to sleep because my mind kept churning out random thoughts that seemed to have no direction whatsoever, but had the making of geniusness.

My final thought – I could feel my brain start to power down – “All men are born equal, is hogwash”. It sounds like a dream or something out of fantasy an epic fantasy. Because everybody cannot be at the top. Men may say it but the reality is that circumstances of birth, resources, and many other factors determine a man’s place in society’s hierarchy.

I’m not exactly a fan of dreaming, especially when I just want to shut my eyes, my body and my mind – including childhood trauma – I dig day dreams though. But before I could file this thought away and reclaim my sleep, another part of my brain went King-Kong on me. If I was reading the fireworks going off correctly, the disagreement was based on the context in which, ‘All Men are born equal,’ was used. That at the time Thomas Jefferson wrote it, he didn’t mean individual equality and …. blah blah blah (In retrospect I’m glad I didn’t bother to delve into it because in reality, that is a lot of garbage to sift through).

Dreams are products of our deepest desires and a reflection of our reality. Sometimes, dreams can be so far removed from reality and make no sense whatsoever. I was not inclined to solve the mystery of man’s nature in the middle of the night, despite my mind forming sense – I know myself.

At that moment I just didn’t care anymore, and let the warring factions in my head slug it out while I sought out sleep.

Side note: I should mention that I got up, grabbed my journal and wrote a draft of everything that happened from the moment I woke up because I didn’t want to forget any of it – which I usually do.

Also, I tuned in to a small voice that nagged me to make the entire midnight escapad into a blog post – dream versus reality – I agreed with it. And I had the perfect opening sentence.